Email us for number.
info@thegemhunters.com

Books are available in our store in both hardcover and E-Pub. 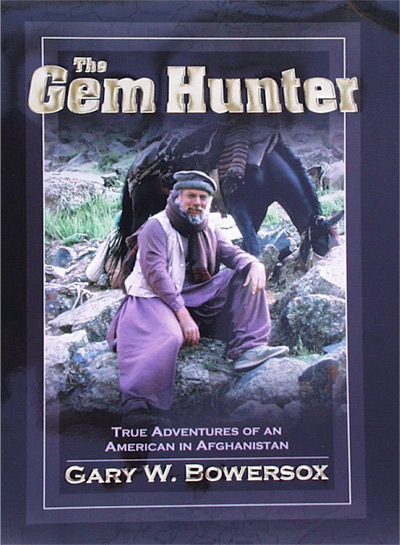 The Gem Hunter Video,
is an excellent companion to the book.

"The Gem Hunter" by Gary Bowersox

This book is the story of one man's endeavor to discover precious gems and to lead a life filled with loyal friends and extraordinary adventures. He finds it all in the Hindu Kush region of Afghanistan but not without risking his life. In this book, Gary W. Bowersox spins his tale of discovery -- both introspective and worldwide. Along the way he encounters danger and intrigue and as he builds lasting friendships. This book (complete with 253 photos, maps, and figures) is a must read for anyone interested in Afghanistan, gems, geography, travel, and or U.S., Middle Eastern, or Central and South Asian politics.

"The Gem Hunter" is a 6" X 9" hardcover book including the following:

All the above carefully indexed for research.

This book is an excellent companion volume to "Gemstones of Afghanistan," which is the first comprehensive, fully-documented book on the geology, history, and lore of the gems and minerals of this war-ravaged crossroads between the Near East and the Far East.

Take this opportunity to learn about this hidden source of gems, their history, lore, and properties. A Smithsonian quality collection of gems, and our one-of-a-kind custom-made pieces are shown in this book - many of which are available for sale.

"Gemstones of Afghanistan" by Gary Bowersox

Foreword Written by Richard Liddicoat, Chairman of the Gemological Institute of America.

GEMSTONES OF AFGHANISTAN is the first comprehensive, fully-documented book on the geology, history, and lore of the gems and minerals of this war-ravaged crossroads between the Near East and the Far East.

GEMSTONES OF AFGHANISTAN features stunning color photographs, original maps, and geographic coordinates of significant mines. The authors have compiled a wide-ranging and thorough set of references that, like the book, will prove invaluable to jewelers, gem buyers, geologists, historians, and those who seek to make a careful assessment of the riches Afghanistan has to offer.

GEMSTONES OF AFGHANISTAN is the first complete reference on gemstones of Afghanistan - the results of 23 years of researching over 6,500 years of history.